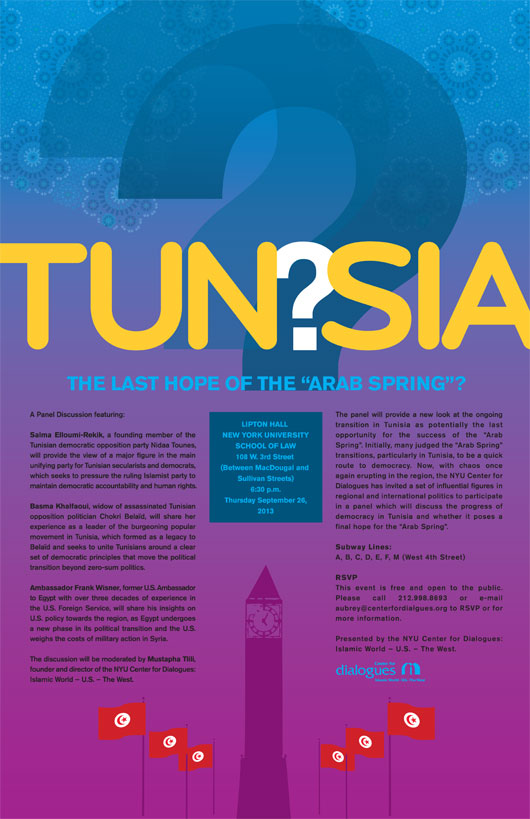 Poster design for a panel discussion about the dire state of Democracy in Tunisia — a situation with many questions.

Salma Elloumi-Rekik, a founding member of the Tunisian democratic opposition party Nidaa Tounes, provided the view of a major figure in the main unifying party for Tunisian secularists and democrats, which seeks to pressure the ruling Islamist party to maintain democratic accountability and human rights.

Basma Khalfaoui, widow of assassinated Tunisian opposition politician Chokri Belaïd, shared her experience as a leader of the burgeoning popular movement in Tunisia, which formed as a legacy to Belaïd and seeks to unite Tunisians around a clear set of democratic principles that move the political transition beyond zero-sum politics.

Ambassador Frank Wisner, former U.S. Ambassador to Egypt with over three decades of experience in the U.S. Foreign Service, shared his insights on U.S. policy towards the region, as Egypt undergoes a new phase in its political transition and the U.S. weighs the costs of military action in Syria.

The discussion was moderated by Mustapha Tlili, founder and director of the NYU Center for Dialogues: Islamic World – U.S. – The West.