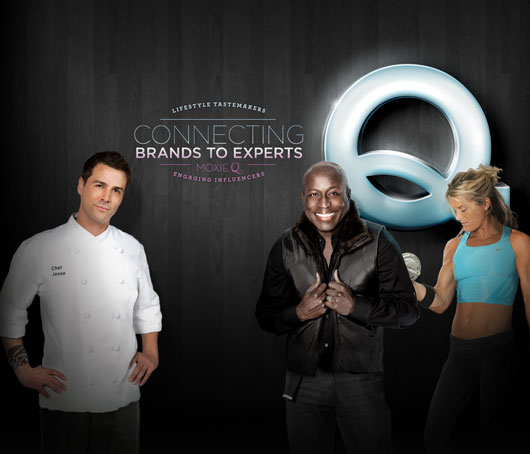 Heidi E. Lehmann is a NYC based social /digital media and influencer marketing strategist who consults with brands, agencies, venture capital firms and start-ups as well as founder and CEO of MoxieQ, a cross-media network of influential lifestyle celebrity experts in partnership with most all US mobile carriers and BravoTV. Twitter @heidielehmann | LinkedIn

1. What social media venue impresses you most and why?

I’m actually a big fan of Twitter. The ability to reach and connect on a personal level with influencers; brands, and celebrities it would otherwise be hard to access, as well as the ability to create a brand for yourself is pretty amazing. Twitter has also linked itself to real time interaction with Television programming which is unique as a social channel.

Obviously, Facebook, LinkedIn, Pinterest and GooglePlus are these big behemoth personal, professional, and common interest ecosystems that connect us in an extremely amplified way that has been transformative; but I think Twitter is just beginning to come into it’s own as an interactive marketing, pr and personal brand channel.

While Founder + CEO of MoxieQ , a social media publishing and promotions platform for Tastemakers, we had a relationship with BravoTV and I wanted to do more direct collaboration with the Housewives of New York talent. Normally to make this happen it would mean communicating and negotiating with the PR firm representing each of the individual housewives. However we had a college kid tweeting for us and I instructed him to try tweeting during the NY Housewives show to see if we could start a direct dialogue with some of them. Within a month we had forged personal relationships with almost the entire cast of the New York HW show, and had them tweeting and retweeting our brand and brand messaging, in addition to forming on-going relationships with a couple which included interviews and covering them at events. For a small brand like MoxieQ this was a real coup and would have been impossible without Twitter.

(Related, I’m excited to see follow the upcoming Twitter IPO, I think they’ve made some smart acquisitions lately that will help set them up for success. They learned a lot from watching the initial (and on-going) pitfalls of the Facebook IPO.)

2. In the world of ‘influencers’, some are established celebrities and some start as bloggers who start from obscurity. Which type has an easier time getting and keeping traffic/ influence?

The new power player “influencer” is an individual that has a sizeable digital foot-print and high engagement which extends across the social graph (facebook, twitter, foursquare, pinterest etc.) in a specific lifestyle category, such as fashion or travel.

These are most often not traditional celebrities or known lifestyle experts (who often don’t have a significant digital presence), but most typically bloggers who have built up a large and following that now extends across all social media channels. You Tube, Twitter, and Pinterest are now creating their now brand of social media influencers as well.

While running MoxieQ, a publicity and promotions platform for Tastemakers, our “talent” were primarily lifestyle experts to celebrities (think Kim Kardashian’s make-up artist, Beyonce’s event planner, Katie Couric’s trainer) and we were continuously beat out in brand pitches by lifestyle bloggers who did not have the celebrity affiliations we did but possessed the digital traction which was considered much more valuable than our talent’s relationships with television or movie stars.

Incorporating bloggers or digital “influencers” as part of a campaign for a product launch and to create preference in the market is becoming more and more common, and these influencers are moving from being unpaid bloggers (“earned” media) to highly compensated “publishers” or even “talent” for their endorsements.

The Fashion industry was where this trend was perhaps the most prevelant initially. During Fashion Week; top fashion bloggers got seats along side NY Times and Vogue at the highly coveted shows; valuable for both their reach and also the perception of a more “authentic” relationship with their followers compared to traditional journalists writing for a magazine or newspaper.

Increasingly, digital influencers are represented across all genres from automotive to sports to travel to food to beauty…to the really big one: Moms!

The stand-out influencers have agents at top tier agent representation such as CAA, NEXT Management and William Morris / Endeavor as well as at new boutiques such as DBA (Digital Brand Architects) that have sprung up exclusively devoted to the blogger and social media influencer space. Other Influencers with reach are joining influencer specialized ad networks such as Style Coalition, BlogLovin, or BloggyMoms (there are many, many more).

I consult frequently with venture capital firms and their portfolio companies around deploying digital influencers to help differentiate their portfolio companies as they launch their brand or a new product into the market. Venture capitalists recognize the asset digital influencers are both for visibility/exposure as well as the content creation that comes from the coverage on-line which is a reusable marketing asset.

Interestingly, many of these venture firms are now investing in the “brands” being built by these bloggers. This is a trend that will continue to grow, especially as more social media channels start creating new types of digital influencers, in particular through on-line video channels such as YouTube, Netflix, Amazon, and many others. These influencers will truly be the new celebrities…!

3. When influencers sign on with established brands, do they loose authenticity? / credibility?

In reality a digital influencer aligning with a brand is nothing more than a new kind of celebrity endorsement which have been a staple of marketing and pr for years and years.

I think for the most part as long as the right disclosures are in place the public and specific influencer following are pretty accepting that if an individual has worked hard to build up a brand, whether it be digital or television or an athlete that endorsements compensation by a brand for the use of their personality, influence and reach.

There should be expected a degree of authenticity however; if an influencer or any celebrity is not a true fan of Target, for example, don’t take money from Target to endorse their brand.

I actually think where this shift of digital influencers being compensated to promote brands or products may have the most jarring impact is within traditional PR firms, which for many years deployed bloggers as “earned” (or “free”) media to promote a product or service.

In the past a PR firm might send a free product sample or service voucher to a blogger/influencer who in exchange the would write about it, spreading the word to their digital base. A pair of DKNY Jeans sent to blogger X would get DKNY a nice write up, tweet, facebook post. Classic and effective word of mouth marketing amplified through the digital channel.

However once bloggers/influencers began classifying themselves as “publishers” or “brands” and demanded compensation for their reach, the transaction moved to a paid media model, whether it was for an individual Influencer or as part of a buy through a network (StyleCoalition). PR firms are now left with only the “long-tail” bloggers (not as much reach or influence) to get their messaging out unless the relationship with a particular influencer is extremely strong.

Earned and paid media are going through a bit of transition in the digital influencer space and with it the old world PR firm paradigm.

4. When established brands hook up with influencers, do they ‘get it’?

The brands that are actively engaging influencers definitely get it as they are doing the upfront research to understand the ROI and know for WOM advertising what a powerful and amplified channel it is due to the digital and social media reach.

That said, there is definitely a learning curve as the digital Influencer space is new in terms of being a paid medium, so many are still gaining fluency and trying to learn the ecosystem.

Companies like Fohr Card www.fohrcard.com and Style Coalition www.stylecoalition.com have begun launched research + ranking platforms for influencers in the fashion and beauty space which will start the standardization process; other categories will follow.

Within the next couple years I’d say agencies, pr firms and brands that aren’t at least making digital influencers a centrally considered part of their on-going marketing spend are going to be left behind pretty quickly.